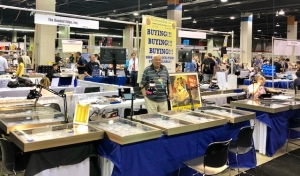 The 2019 Chicago A.N.A. World’s Fair of Money is now in the books, and once again, Rosemont did not disappoint. Rob, Robbie, Miguel and Ron were all hands on deck for the majority of the show, with The Reeded Edge’s booth double-stacked with customers for much of the time. (The picture to the left was taken shortly after we opened the booth during set-up in the A.M. and was one of our few quiet periods during the show.) The quantity of sales was nothing short of astounding with over one hundred retail sales invoices written during the show’s duration. Buying was also great. Many fresh coins were offered to the guys throughout the week; the end result was many hundreds of new coins purchased for inventory. Individual highlights are numerous, but because the coins are currently in the processing stage, summarizing them here would be premature. Stay tuned. The A.N.A. is billed as the show of shows, so expectations always run high. This year’s event ranks as one of our greatest in company history, and from what we could tell, many of the other vendors from around the world concurred. We don’t want to get too far ahead of ourselves, but if this show is any indicator about the overall health of the coin market, some really good times may be on the horizon.