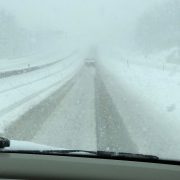 The Whitman Baltimore Coin Show certainly didn’t start out well. Our trip out of Cumberland last Tuesday almost didn’t get past the first mountain. Two jack-knifed tractor trailers had the snowy I-68 east bound lanes closed, forcing us to use an emergency pass-through on the interstate to reverse direction, exit the interstate and try our luck on a snow covered access road paralleling I-68. As fortune had it, we got by the impasse, but only to experience similar travel challenges posed by the inclement weather for the next four hours; our ordinary 2 hour trip to Baltimore ended up taking 5 1/2 hours. Unfortunately many other people trying to commute into and around the snowy mid-Atlantic region experienced the same thing. All of this initially took it’s tole on the Baltimore Coin Show. Appointments cancelled, dealer attendance dwindled, and set-up on Thursday morning at the show was relegated to a virtual ghost-town status. It didn’t bode well for the next three days…Mary Counts, the always-positive force for the Whitman staff was quick to remind us, that one of the best Baltimore Shows ever occurred approximately 30 years earlier during a snow storm that piled feet of snow in and around Baltimore, and limited all but the most die-hard dealers from attending. Apparently gold rallied during the duration of the show, and everybody there made unbelievable money. Although we had no specific recollection of these events, her point was well taken. A good show can be had under even the most adverse of  circumstances. Once the public entered at noon on Thursday, that is precisely what happened. The activity at The Reeded Edge’s table was intense and non-stop. Buying and selling took place until late Saturday afternoon. Yes, this show really did stay active and profitable throughout Saturday (which any more, is VERY unusual). At the show’s end, The Reeded Edge had done over $300,000 worth of business, submitted quite a few coins to PCGS for grading, and met more than a few new customers who expressed interest in building business relationships. In short, the show ended up firing on all cylinders, and was successful at all levels. We have to credit Whitman for overcoming adversity beyond their control, and making this show a resounding success. In retrospect, it is no mystery to why The Whitman Baltimore Coin and Collectibles Expo has evolved into one of the nation’s premier coin shows.