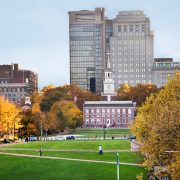 The A.N.A.’s Worlds Fair of Money is now in the history books. As we have mentioned previously, this is the biggest coin show of the year, so build-up and expectations both ran high. We are happy to report that the show delivered in all aspects. We suspected that Philadelphia both geographically and demographically would be an ideal location for this venue. After all, 40% of the country’s population is within a 500 mile radius. It also neighbors some of the country’s most affluent areas. On paper, The City of Brotherly Love seemed to be the perfect location. We have not seen the final attendance tallies, but the room appeared full most of the show. This was a stark contrast to Denver and Anaheim, the two previous A.N.A. locations. Equally as important, the attendees transacted business, and lots of it! In all, The Reeded Edge wrote over 100 show invoices, and sold almost 400 certified coins. Results are the ultimate measure for any coin show, and it’s hard to argue that bottom-line numbers should encourage the A.N.A. to favor other mid-Atlantic locations moving forward. Not to over-politicize this Market Report, but with the exception of a few proven mid-western locations like Chicago and Indianapolis, this show should stay anchored on the east coast. News Flash: Trade shows are the lifeblood for sustaining the A.N.A.’s existence. With a declining and aging membership core, these shows and the dealers that support them, provide the money that the organization so desperately needs. We realize that some members may cry foul, but if the A.N.A. dealers that purchase bourse tables can’t make enough money to justify attending these venues, then the A.N.A. will die. In this dealer’s humble opinion, there is no need for the A.N.A. to EVER consider cities like Anaheim, Los Angeles, Denver, Portland, Detroit or Kansas City for their marquis show again. Baltimore, Philadelphia and Chicago are proven winners, so let’s keep the show in those locations.

The Reeded Edge had a full staff on hand for most of the show. Veteran support staff like Miguel Lopez and Rory Shelby combined with first-timer Ron Iliffe assisted Rob and Robbie in the many tasks associated with an A.N.A. Buying and selling represented a good portion of the day’s activities, and in both areas, we remained busy throughout. But it was the behind-the-scenes work that really kept the guys in high gear. This was our first show that we implemented a new, fully automated, point of sale system that was directly tied into our inventory data base. This allowed us to simultaneously remove coins from our web store, Collector’s Corner, eBay and any other online venues where they were listed. There were admittedly a few speed bumps with our new roll-out, but for the most part, the process went pretty well and saved us a lot of potential back-end headaches. There was also the challenge of continually submitting coins to PCGS for on-site grading. This is one of the truly great resources at larger shows like the A.N.A. and allows for a constant influx of fresh, new coins during and immediately after the show. Part of the logistical challenge for us at any coin show is to continually rotate inventory. Our customers expect new coins on a regular basis, and it is our job to make sure that they are not disappointed.

In retrospect, the A.N.A. was a great coin show, and certainly one of our best of the year. It proved, in no uncertain terms, that the coin market and coin hobby are both still very healthy. People seemed willing to open their wallets and checkbooks, an indicator of an economic uptick. An interesting side note is that all of this spending activity took place during a terrible week for precious metals. The fact that this show still persevered is indicative of underlying strength in the numismatic market, and perhaps more importantly, economic stability. The last week was a near-perfect storm, and we feel confident that the momentum should continue into the fall season.

In the next week, there will be hundreds of new coins appearing on our web store, eBay and Collector’s Corner. Also, for those of you that subscribe to Coin World and Numismatic News, be sure to check out our ads there, as well. Plenty of material is still out at PCGS and CAC for grading, so expect to see those returns filtering into inventory in the very near future. Provided coin shows moving forward reinforce what we got a dose of last week, there is reason for continued optimism. Next up for The Reeded Edge will be The Ohio State Coin Show in Columbus, Ohio on Labor Day weekend. We will have further details about this popular venue forthcoming in next week’s Market Report.